Changing The Management of Prostate Cancer 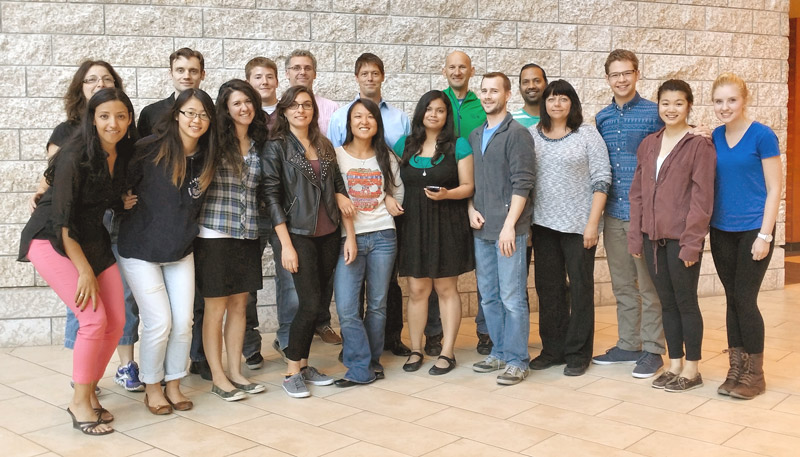 A simple blood test that has the ability to accurately identify which patients require treatment for prostate cancer has the potential to improve patients’ treatment success and quality of life, while saving significant health-care system costs.

The most commonly diagnosed form of cancer in men – prostate cancer will affect one in six in their lifetime. If caught early, the survival rate for localized, non-aggressive prostate cancer is 99 per cent however many men are currently being diagnosed and receiving treatment without actually needing it. Thanks to your support, progress is being made in the lab of the Alberta Cancer Foundation’s Frank and Carla Sojonky Chair in Prostate Cancer Research held by Dr. John Lewis at the University of Alberta.

Currently managing and overseeing the Alberta Prostate Cancer Registry and Biorepository – one of the largest prostate collections in the world – Dr. Lewis has access to over 200,000 Albertan patient samples. This vast amount of data available for research has given Dr. Lewis the opportunity to make immense strides in prostate cancer research with a direct line of sight for Albertans facing cancer. Most recently, Dr. Lewis and his team have focused their attention on validating a group of biomarkers that can tell aggressive prostate cancer from non-aggressive.

Utilizing biorepository samples from over 500 Albertans, Dr. Lewis has developed an accurate blood test, called ClarityDX, which will help determine whether a patient requires a biopsy for further testing, based on the identified biomarkers.

The first of its kind in Canada, this discovery will be impactful for patients who have received a cancer diagnosis and made the decision to take part in “active surveillance” – an option offered to patients with low-risk prostate cancer. This active surveillance program requires patients to receive a yearly biopsy – an invasive and potentially complicated procedure. Because of these risks, some patients opt to receive unnecessary surgery rather than get biopsied repeatedly. This blood test will give patients and their health-care teams the ability to see if their cancer has worsened, and will provide confidence to either maintain active surveillance without the requirement of a biopsy, or look into possible treatment options. And for those patients who have been identified by the blood test as having an aggressive disease, outcomes will improve as they will be able to start proper treatment sooner, perhaps before symptoms present themselves.

This technology will change the management of prostate cancer. Once this test is implemented - you will only be recommended to get a biopsy if you need one.

Next steps include taking this test from the lab to the clinic, where it will be a critical screening step that will work in conjunction with PSA (prostate-specific antigen) testing. If a patient’s PSA is above a certain threshold, they will receive the new blood test. Once put into action, Dr. Lewis estimates that up to 40 per cent of unnecessary biopsies could be avoided.

Without the support of Alberta Cancer Foundation donors, this kind of advanced screening would never have the opportunity to make it from the lab to the bedside of patients

Dr. Lewis continues to study ways to block the spread of cancer, and has made great progress developing “tumour glue” – a type of drug that would have the ability to prevent cancer cells from metastasizing to other parts of the body.

Two years ago, his team identified 17 genes that are involved in the metastases process, and seven of the genes have since been validated to block metastasis completely. Dr. Lewis and his team are working to develop “a tumour glue” drug based on these genes that will prevent the spread of cancer in patients, making it the first drug in the world to do so.

Because of you, Alberta continues to be a leader in prostate cancer research. Thank you for making investments that matter.

View Our Other Progress Reports To Learn More About Impactful Investments