A Fitting Tribute to an Elite Athlete 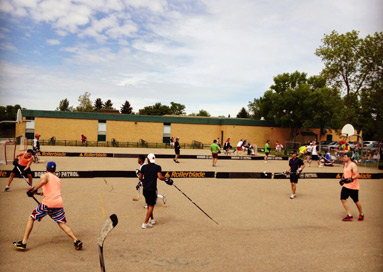 At Strathcona Composite High School, a South Edmonton school of more than 1,500 students, it was hard not to take notice of the Schlosser family. I was fortunate enough to have attended Scona, and the University of Alberta thereafter, with four of the six Schlosser children. I must say I was amazed at how all of them were not only gifted athletes, but hard-working students too. I guess these traits must run in the family! Furthermore, witnessing their interactions was unlike anything I had ever seen between siblings. The strength of their close friendships and unwavering support for one another was infectious, similar to how they would treat teammates on their various sports teams. This admirable sibling bond was put to the test when the Schlosser family was faced with a giant hurdle in their lives, one that sadly none of the track star Schlosser athletes could easily leap over like they would in a championship track meet.

In 2009, Owen Schlosser, a varsity athlete who ran cross-country and played soccer and tennis religiously, was thoroughly enjoying his industrial design program at the University of Alberta after switching from two years in the physical education faculty. Owen discovered a lump in one of his lymph nodes that led to a stage 4 melanoma cancer diagnosis. The diagnosis shocked everyone who knew the 21 year old as he was committed to eating healthy, staying active, and definitely not someone who was excessively exposed to the sun. In true competitive athlete form, Owen saw his diagnosis as only a minor obstacle in his life and decided to partake in a clinical trial in Florida for a drug called Ipilimumab that would be accompanied by two other chemo drugs. Sadly, Owen passed away on June 2, 2009, just four months after his diagnosis and a month shy of his 22nd birthday.

A year after his passing, Owen’s large circle of dedicated friends and family created the Win4Skin 3-on-3 hockey tournament in his honour. Over the past two years, the event has generated more than $82,000 for two causes: the Mary Johnston Chair in Melanoma Research at the Cross Cancer Institute and the Owen Schlosser Endowment Fund for underprivileged athletes through the Edmonton Community Foundation. The Alberta Cancer Foundation’s Mary Johnston Chair in Melanoma Research, held by Dr. Alan Underhill, helps attract and retain top researchers and clinicians to the province, providing them with valuable resources to develop better prevention, detection and treatment methods for melanoma.

Now in its third year, the 2012 Win4Skin tournament was held on June 2 at the Brookside Hall in Riverbend. Thirty teams participated and numerous spectators stopped by throughout the day to enjoy the silent auction and BBQ too. In the evening, participants traded in their jerseys for evening wear at the Gala Event that included a hair massacre and dance that went well into the wee hours of the morning. Win4Skin was proud to raise approximately $62,470 putting the three year total for the event at over $140,000 to the two causes. The Win4Skin 3-on-3 hockey tournament is an event that Owen would have jumped at the opportunity to participate in because of its tie to healthy living and giving back to the community. Undoubtedly, Owen was smiling down on the Win4Skin participants on June 2 as they worked together as a team to achieve a common goal—that of a cancer-free future.