Shortly after her 46th birthday, Natalie Kwadrans was diagnosed with stage 3 breast cancer. Despite having her life turned upside down, Natalie believes cancer has given her more than it has taken away. The Calgary resident shares her story today. 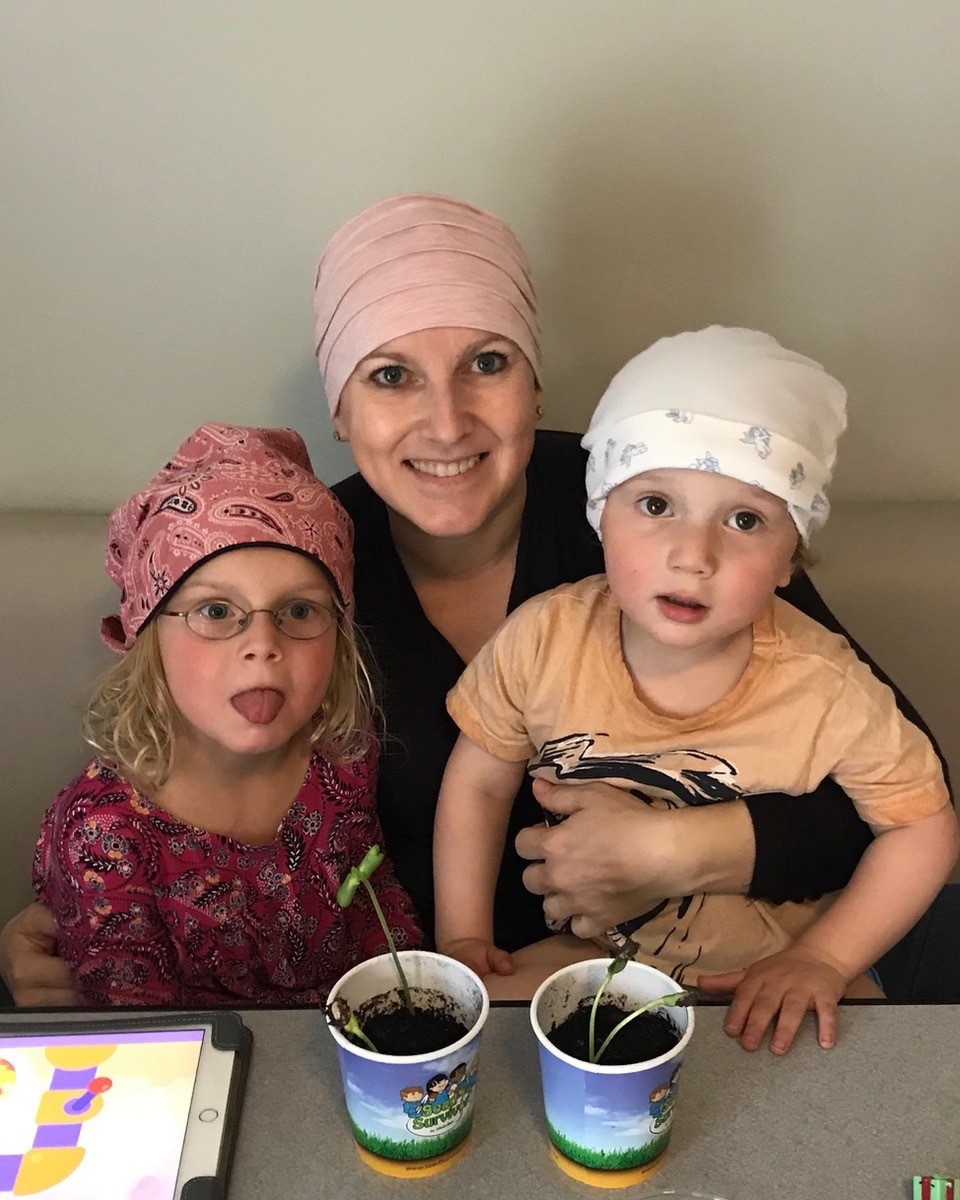 “The last 3 months of 2018 were tough. In mid-October, I severed a tendon in my hand, requiring two surgeries to fix it. A few days later, my five-year-old daughter landed in the hospital with double pneumonia. I stayed with her 24/7. My husband, Michael, wanted to relieve me so that I could sleep at home, however, I couldn’t lift anything with my hand for 6 weeks. That meant I couldn’t care for our two-year-old son on my own. So, I stayed at the hospital in isolation with my sick daughter. It’s no surprise that I also got sick.

November came and went, and I couldn’t shake the cold I caught. I struggled through December and eventually went to ER on December 30, 2018, thinking it had turned into something worse. A chest x-ray showed clear lungs, so I was sent home with what was assumed to be a bad case of the flu. I was exhausted. And I say this as someone who fully understands exhaustion; I am a diagnosed narcoleptic. I remember one evening in early January 2019 being curled up in a little ball and crying. Sobbing, in fact. I kept telling Michael that something was wrong with me. It didn’t make sense that I couldn’t fight this cold/flu and that the exhaustion wasn’t from my narcolepsy. It felt different, though I couldn’t explain why. I would come home from the new job I had started in December, and I would nap from the moment I got home until dinner was ready. Michael was doing everything. As soon as dinner was done, I would go to bed while my husband cleaned up, took care of the kids, put them to bed and walked our two Jack Russells.

Finally, things started to turn for the better in February. I had overcome my cold, though the exhaustion was still there. Then, on the morning of February 19, I felt this tiny little lump in my right breast while showering. It was the size of a split pea. To this day, I’m surprised I felt it given how small it was. I didn’t think much of it because I was previously told that I had “lumpy breasts”. In particular, I had one large lump in my breast for almost 20 years which had been monitored with multiple mammograms over the years. It was apparently nothing to worry about. Since this was a new lump, I called my GP and made an appointment for the following day. He sent me for a mammogram and ultrasound and after the imaging was complete, the radiologist came to talk to me and told me he was referring me for a biopsy. Exactly two weeks after that radiology appointment, my results were in. I had aggressive invasive stage 3, triple-positive breast cancer. I was floored!

How were we going to tell our kids? We decided to simply tell our youngest that I was sick and needed medicine. For our eldest, I read her a book entitled “Maman a le cancer” (Mommy has cancer), written specifically for young kids. She had a few questions and seemed to take it relatively well.

My treatment plan is intense: five months of chemo, with infusions every other week for the first half and weekly for three weeks, followed by and one week off for each cycle in the latter half. I’m now into my last half of chemo. I also started a targeted therapy three weeks ago. Surgery will be scheduled post-chemo, followed by radiation and hormone therapy.

While getting cancer is one of the worst things that has happened to me, it has also given me so many wonderful things. Yes, you heard me right. There is good that has come from this.

My mom and dad, who are in their late 70s, packed some clothes and drove 3,200 kilometres to get here just before my first chemo treatment. They are staying with us until early September, at which point my in-laws, also from Mississauga, will swap them out. Having help with daily household chores and the drives to and from appointments have taken a load off my husband, who can continue working. My children also get to spend quality time with their grandparents, which is something they wouldn’t have been able to do without my diagnosis.

My parents’ support has been incredible. They have unfortunately a strong understanding of what it’s like to support someone going through cancer. They did it for my younger brother, who is a three-time Hodgkin Lymphoma survivor. Their understanding, patience and love have been a big part of helping me cope with my diagnosis and treatment. It also allows me to spend time with them. For example, I was able to join them in knocking off something from their bucket list: attending the Calgary Stampede. Over the past few days, I was able to join them at the Stampede Parade, take in the evening show with my parents as well as catch part of the rodeo. 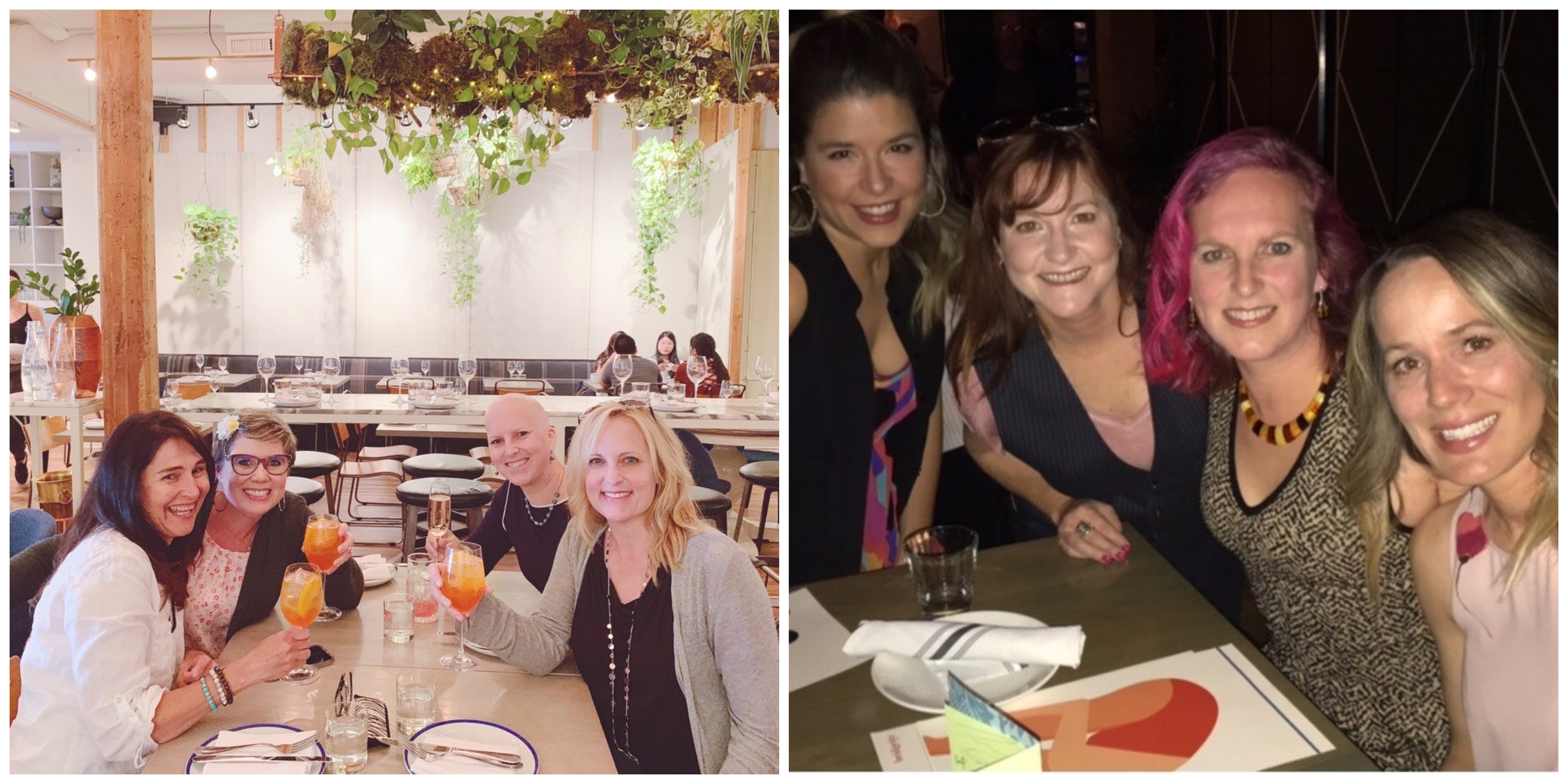 My social network has never been so active. I have reconnected with friends from across the country and globe. Four of them even flew from BC and California to visit me. The messages, cards, visits, etc. give me so much strength. Even when I am lying in bed and have no energy, I still feel connected and surrounded with love from friends and family from near and far. The power of my network is invaluable.

Cancer has also given me perspective. I never thought I would cheer when my doctor told me that my bone scan and shoulder x-ray showed I had arthritis. Given the circumstances, that was the best news I could have had. My bad days make me appreciate the good ones. I’m thrilled when I am able to socialize with friends. I love it when I can join my husband and kids for an activity out of the house for a few hours. I’m happy when I feel well enough to not cancel our weekly date night so that my husband and I can have a few hours alone where we can enjoy each other’s company, reconnect and enjoy everything life has to offer.”

“Life is what you make of it; it’s about the things you can control. Cancer has really made me appreciate the perspectives from which I look at things and how I spend the time when I feel good.”