Why Donald Johnston Gives Back 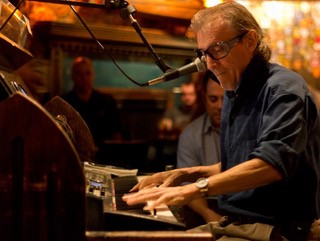 Donald Johnston from Red Deer has been in the music and entertainment business for over 50 years. He has travelled across North America with bands and as a solo act, including 17 years on the piano bar in Edmonton’s Rose and Crown Pub and 15 years in Durty Nelly’s Irish Pub in San Antonio, Texas. But in 2013, he had to make the difficult choice of retiring early to begin his cancer treatments.

Don was initially diagnosed with leukemia in 2006 but because his cancer was slow developing he was able to continue working for seven years. When his cancer started to progress rapidly, he returned to Red Deer and started treatment immediately. He was entered into a bone marrow transplant program at the Tom Baker Cancer Centre in Calgary and fortunately was connected to a matching bone marrow donor in 2016. Though Don was thrilled to have found a match, he was concerned about the financial costs that would come with treatment. Since the bone marrow transplant was a long term treatment that would take place in Calgary, Don had to find temporary accommodation in the city.

Fortunately, he received financial support through the Alberta Cancer Foundation’s Patient Financial Assistance Program (PFAP).  PFAP is a donor-funded program that provides financial support to Albertans in need who are undergoing active treatment. It can help to cover expenses such as rent, groceries, out of pocket medications not covered by insurance, utilities, and accommodation for those travelling out of town for long-term treatments such as for a bone marrow transplant.

“My forced early retirement put me in financial distress.  I was able to procure an apartment at the Foothills Hospital property through the Patent Financial Assistance Program.  The apartment housed myself and my caregiver sister which meant she was able to remain with me in Calgary,” says Don.

Don was grateful to not have to worry about making ends meet. Instead, he could focus on his treatment and healing. “We returned to Red Deer in the fall with frequent visits to the Tom Baker Clinic in Calgary. The financial help I received from the Alberta Cancer Foundation made these trips, along with the help with the many prescription costs, possible,” says Don.

The support of Don’s sister, Enid Best, helped him tremendously during treatment. Looking back, he is incredibly grateful to have had her support as a caregiver.

“I went through some significant discomfort, to put it mildly. My sister stayed with me the entire time I was in Calgary. She often staying in my room with me for up to 12 hours. Her assistance at this time was a big part of the healing especially after I was moved from my hospital room to the apartment I shared with my sister.  She looked after my meds. Groceries. Cooking. Moral support. Everything. She was my caregiver and my rock. God bless her,” says Don.

After the bone marrow transplant, Don’s prognosis slowly improved. But a year later, it was found that his transplant had failed. “My doctor told me I had less than a year to live. But I was prepared and was comfortable with the turn of fortune.” Don prepared his affairs and put the word out that he was going to host a fundraiser for the Alberta Cancer Foundation in support of the Patient Financial Assistance Program.

“My career for 50 years was entertaining in singalong piano bars.  I contacted my entertainer friends in Edmonton who jumped on board to create a fundraiser to give back to the Alberta Cancer Foundation. With generous help from the B Street Bar in Edmonton owned by Goce George Trencevski, I hosted my first fundraiser on Family Day 2017. We played music for about 12 hours and raised just under $8500.”

Since then Don and his community have hosted two more musical fundraisers, ‘Don’s Musical Reunion’, in support of the Alberta Cancer Foundation at the B Street Bar in 2018 and 2020. Raising over $14,000 for the Patient Financial Assistance Program.

Throughout 2018, Don went through a series of visits to the hospital for critically low blood count, a blood bore staph infection and a mild heart attack. “Again and again, the doctors and nurses at Red Deer Hospital pulled me through. Somehow through all this, my blood counts were improving and in January 2019, I had another bone marrow biopsy and was told that my counts were greatly improved. This came as a surprise to all of us.”

Well into 2020, Don is doing quite well. And he is grateful to his health care team and the staff at the cancer centres in Red Deer and Calgary for their support over the years. 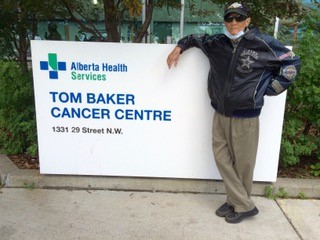 “I commend Dr. Hui, my cardiologist for 30 years. My physician, Dr. Jeffery Mulder. Dr. Katherine Rudolph my first oncologist at the Central Alberta Cancer Centre in Red Deer. Dr. Card who first diagnosed my type of Leukaemia. Dr. Lynne Savoie who guided me through the transplant process and gave me the wisdom to proceed and the courage to endure. Dr. Karim Jamani who showed compassion, wisdom, and the courage to let me carry on with many of my own decisions and for providing me support during my recovery. My heartfelt gratitude and love for all my nurses. Too many to remember but all significant. And the LPNs and cleaning staff who kept me safe when I had no immunities, lab techs and the young Korean woman at the little coffee shop at the Red Deer Hospital who has my favourite coffee poured and waiting by the time I get to the counter. And the social workers who helped me with the Patient Financial Assistance Program,” says Don.

Don is also thankful to his bone marrow stem cell donor, for saving his life. “As I have improved to this unexpected level of wellness I’ve been allowed to learn the name of my donor and be in contact with her.  A wonderful woman who lives in Germany who had the lifesaving compassion to give me this gift.  Thank you, Sieglinde. Danke.”