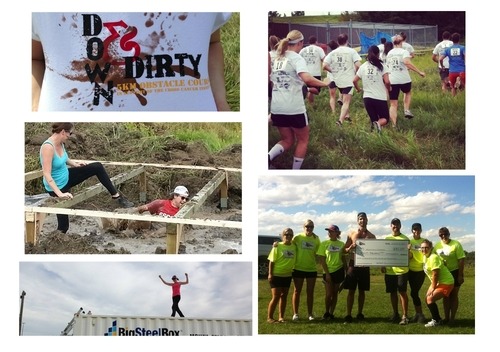 August 25th, 2013 brought the inaugural edition of the Down & Dirty 5KM Obstacle Course to the City of Edmonton.

The obstacle course race promised to test participants through a series of challenges including a mud laced balance beam, a Big Steel box to scale and a slip n slide.  Throughout the day, 332 participants gathered at Sunridge Ski Area, along with their family and friends for one collective goal, to raise funds for the Cross Cancer Institute in Edmonton.  The sense of community was strong throughout the day as the totals raised for the Alberta Cancer Foundation quickly escalated; donations multiplying as each heat wave came in through registration, and by the end of the day had accumulated to $70,000.

Blown away by the support of the community we had received for our first year of the event, our original goal of $20,000 was reached weeks before race day, and our final total came as a wonderful surprise as we had hoped to raise potentially $50,000 in our inaugural year.

However, fundraising for the Cross Cancer Institute was not something new to our founder and Race Director, Dr. Rob Deltombe, D.C.  When he was in his second year of his undergrad, his Grandmother passed away from brain cancer.  It was a slow battle for her as she chose not to fight due to her age.  Shortly after his Grandmother passed, Rob decided he wanted to honour her by raising money for the Cross Cancer Institute.  It was then that he vowed to raise $1 million dollars for cancer research in his lifetime.

His first fundraising idea came to him late one night; that he and a handful of his friends would set out early one morning after a fresh snowfall and shovel driveways.  With pre-stamped envelopes from the Cross Cancer Institute and a letter detailing his random act of kindness in hand, Rob and his friends set out.  They didn’t ask if people for a donation before doing so or if they would like their driveways shoveled, they would instead leave a letter in the mailbox and informed people that if they would like they could make a donation for the Cross Cancer Institute, otherwise to have a great day.  They continued this throughout the winter, and ended up raising $3,500.

The following summer, Rob wanted to keep the ball rolling so he created a hole in one event and headed out to a different golf course almost every weekend that summer and asked for $10 donations for a chance at a $10,000 prize or on two occasions, the new car that he had driven out to the course.  In that summer, Rob had raised $7,895 for the Cross Cancer Institute.

While beginning his chiropractic career, Rob had to put his fundraising efforts on hold until he was asked by a close friend to sit on a committee to assist in planning the Alberta Cancer Foundation’s first annual Triathlon.  Rob jumped at the opportunity and two weeks into the initial meeting began thinking, mud runs and obstacle course races had been growing in popularity in the last few years.  Inspiring him to combine that idea with his fundraising efforts and bring together a new race for the City of Edmonton.

What once seemed a lofty goal for Dr. Deltombe, of raising $1 million dollars in his lifetime, is already at $82,000 including the Down and Dirty 5km Obstacle Course fundraising efforts.  We look forward to this event growing each year, becoming bigger and better as our participant sizes grow with people who are eager, as we are to support such an important cause.

As each member of the Down and Dirty race committee has been in someway effected by the loss of a loved one due to cancer, we are so grateful for the amazing friends, family and community that have supported this event once a dream scribbled on a cocktail napkin by our founder, Dr. Rob Deltombe.