As children growing up in the mid-1940s, Phil and Harriet Libin learned about the importance of giving back from their respective families. The couple’s parents, Saul and Sonia Libin and Leo and Goldie Sheftel, donated whatever time or money they could afford to people in need. As a result, Phil and Harriet began volunteering in their early teens — before they even met. Regardless of what the Calgary forecast had in store for them, they would each take to the streets with blue collection boxes every Sunday morning, fundraising for the Jewish National Fund of Canada.

“When you go out and get that quarter or that dime or that nickel, it gives you that sense of satisfaction in helping. My parents would never turn away someone in need, and I grew up seeing my parents give,” says Phil. “What’s the old saying: ‘Monkey see, monkey do?’” he chuckles.

Phil and Harriet first met as teenagers while attending Central Memorial High School in Calgary. The couple will celebrate their 65th wedding anniversary this year.

Today, the Libins are well-known as dedicated fundraisers and philanthropists in the city. They started the Phillip and Harriet Libin Family Foundation in 2009 to help support various local organizations and have often focused their fundraising efforts on the medical field. This past year, they donated $3 million to the Alberta Cancer Foundation supporting breast cancer-related research and clinical trials at the new Calgary Cancer Centre.

With this state-of-the-art cancer centre opening its doors in 2023, the Alberta Cancer Foundation, in partnership with the University of Calgary and Alberta Health Services, has launched the OWN.CANCER campaign to raise $250 million in support of enhanced research, treatment and care within the centre.

Raising funds for cancer care and research is a cause close to the Libin family’s hearts. In 2006, Sheryl — Phil and Harriet’s daughter, Stuart’s sister and mother to Michael and Matthew— was diagnosed with breast cancer. Phil and Harriet went to every single appointment with Sheryl at the Tom Baker Cancer Centre. After an 11-year journey with cancer, Sheryl passed away from her illness in 2017 at age 55.

“Sheryl will have been gone for five years in May,” says Harriet. “I always said to Phil, ‘We have to find some way that will be meaningful to keep Sheryl’s memory alive.’ And when the Calgary Cancer Centre came up, we thought it would be a perfect place because it’s meaningful for us and because we went through the process with her.”

Sheryl shared the same generous spirit as the rest of her family, as she and Stuart followed in their parents’ footsteps to volunteer and lend a helping hand to anyone in need.

“We want to do this in memory of Sheryl and in honour of Stuart,” says Phil.

In recognition of the Libins’ contribution, the Calgary Cancer Centre is naming the Knowledge Centre auditorium the Philip and Harriet Libin Auditorium. The space will facilitate meetings, seminars and conferences where medical professionals and patients alike will have a space to communicate and share research. 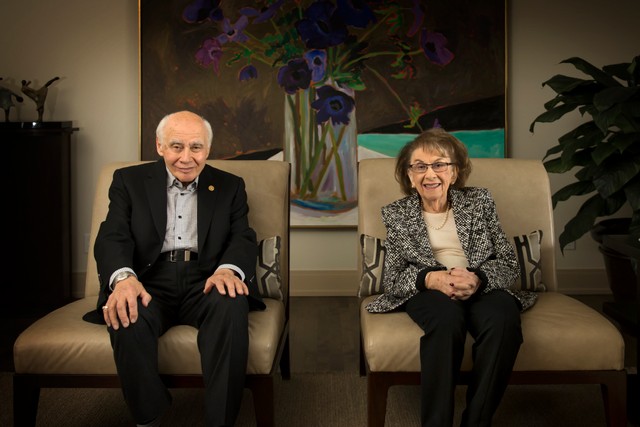 “This will be a centre of excellence for research,” says Phil. “Educational lectures in this auditorium are going to be key to the patients who are travelling along their cancer journey. For Sheryl, she was sitting on pins and needles wondering, ‘What is this disease doing, how quickly is it moving?’ The unknown is the scariest. So, this auditorium will be a venue to provide a source of information and can help cancer patients start to see how their journey is going to fall into place.”

The Calgary Cancer Centre is still under construction, but requests are already underway to book the auditorium for patient advisory meetings, support groups and lectures.

“We’re quite excited for the centre to open,” says Harriet. “Even though it isn’t going to work for our daughter, this will offer hope for others. Throughout the years and growing up, there was always some member of our family who was not well. It became a part of our lives and always felt important.”

When it opens next year, the 1.3-million square foot Calgary Cancer Centre will have capacity to treat more cancer patients with increased space for clinical trials that is currently available at the Tom Baker Cancer Centre. It will also contain 110,000-square feet of dedicated research space.

“I really hope this centre will give people confidence knowing they have a place to take their loved one to be cared for,” says Harriet. “I hope that in the not-too-distant future, they’ll find cures for some of these cancers or make things easier for people if they can’t be fully cured. I think Sheryl would be honoured to know that we remember her in this way, and she’s in our hearts always.”

Phil and Harriet have raised significant funds for multiple causes over the years. Phil, who led a successful career in development and commercial real estate, has been a member of the Rotary Club of Calgary since 1989 and has served on the boards of various charities. Together, they’ve helped raise millions for local communities and causes.

“You do these things because you want to,” says Phil. “And because there’s a need for them.”

Giving back is a generational habit for the Libins. Growing up, Stuart also learned to contribute back to both the Jewish community and the community at large. As an adult, he joined the Rotary Club of Calgary and the Rockyview Hospital Fund Development Council.

“It was always natural,” Stuart says, “they always had a bug in my ear. I guess you could say I learned a great lesson from [my parents].”

The Libin’s lessons — their generational generosity — will continue to have a lasting impact here in Calgary and will make a tremendous difference for cancer patients at the Calgary Cancer Centre and beyond.

The OWN.CANCER campaign is raising $250 million in support of improved research, treatment and care at the new Calgary Cancer Centre. This game-changing initiative is backed by three trusted community institutions: Alberta Health Services, Canada’s first and largest fully integrated provincial health system; the Alberta Cancer Foundation, the official fundraising partner for all 17 cancer care centres across the province; and the University of Calgary, a globally recognized leader in medical research and home to tomorrow’s health-care professionals. Currently, under construction, the Calgary Cancer Centre will open its doors in 2023 as the largest, most comprehensive cancer centre in Canada.