Hope and All That 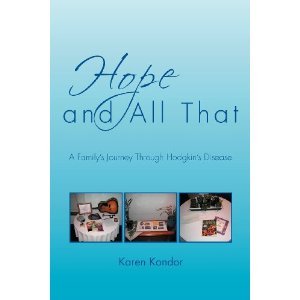 After releasing my book, Decadron Diary, I quickly realized I’d made a big marketing mistake.  First of all, many people don’t know what Decadron is (FYI – it’s a drug commonly used to prevent nausea and vomiting during chemo treatment).  Second, many don’t know how to pronounce it (deck-a-dron…with   a short ‘o’).  One day, while lamenting my error to my husband, he asked me, “So, what is your book about, anyway?”  After getting past the fact that my own husband hadn’t yet read my book, I answered, “I guess it’s about hope and all that.”  “Sounds like a title to me,” he replied.  And, so began the path to re-releasing my book under the title, Hope & All That.

Writing Hope & All That actually began almost ten years ago while my dad was undergoing treatment for Hodgkin’s Lymphoma at the Cross Cancer Institute in Edmonton, AB, Canada.  I was the family scribe who kept friends and family from near and far up-to-date with dad’s treatment.  Sometimes daily, but mostly weekly, I sent emails describing the good, the bad and the ugly.  I received more than one reply telling me that I should consider writing as a career.  I dismissed the idea at the time, partly because I was in the throes of raising three young kids, but also because, after my dad passed away in March, 2004, I wasn’t eager to relive the diagnosis-treatment-decline-death scenario any time soon.

Fast forward several years, and I find myself with a little more time on my hands, and a yen for a new project.  I hit my keyboard with a passion, basing my writing on the series of emails I sent many years before.  Chapters began to form, each based on an email, with details and stories added to fill the chapters with more substance and emotion.  The intent of the book is not to focus so much on the struggles of a patient and family dealing with cancer.  Rather, the focus is on the unique ways we came together as a family to cope, using hope, time together, communication and reflection.

Since Hope & All That was released in 2011, a variety of stores in Edmonton have carried my book; the University of Alberta Hospital Gift Shop, The Wired Cup, and the much missed Greenwoods Book Shop.  Although no longer found in stores, Hope & All That can be purchased online at www.amazon.com, www.amazon.ca, and www.barnesandnoble.com.

For more information, I welcome emails to kkondor@telus.net.

Wishing you health, hope and healing,