Born and raised in Australia, Jodie Tilley moved to Canada in 1996 after falling in love with the Rocky Mountains during a ski trip. After living in Halifax for several years, Jodie has been a resident of Calgary since 2005, and has made Canada her home for more than half of her life. It would be at Calgary’s Tom Baker Cancer Centre, where Jodie would be treated for colon cancer. 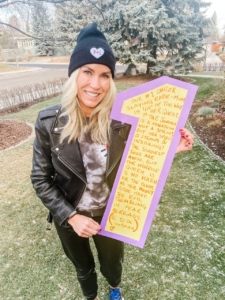 For the last 13 years, Jodie has been working in the medical field – 8 of those years in breast cancer reconstruction and cosmetic surgery and the last 5 in medical aesthetics. Along with her business partner, she opened two medical injectables clinics in Calgary. Although she leads a busy life running her business and raising her 7-year-old twin sons, she has always considered herself a healthy person. “I’ve always exercised, and always focused on what I put into my body,” she says.

During Thanksgiving of 2021, Jodie was admitted to the emergency room after suffering a complete bowel obstruction for three consecutive days. At first, she was misdiagnosed and sent home; but upon returning to the ER only an hour later, she received a CT scan and discovered that there was an obstructing tumor in her colon – and her colon was on the brink of rupture. She immediately received emergency surgery.

Jodie recalls her thoughts from that day. “This is impossible, this must be something else.”

Before her diagnosis, Jodie had experienced certain signs and symptoms; for about 6 months, she had been feeling intense abdominal pain after large meals, as well as inconsistent bowel movements.

But because of the pandemic, Jodie explains that it would have taken about 6-12 months to see a specialist after going through her physician. She suspected that he had developed food intolerances, and rather than going through the time-consuming process of waiting to get into a GI soecialist, she decided she would try to figure it out on her own through the process of elimination and cutting out certain foods from her diet.

She also wondered if her symptoms were an early sign of ulcerative colitis, as her mother had developed it around her age. Jodie was also exhausted a lot of the time, however, she chalked it up the stressed of mothering of two young boys while running a business and a household. 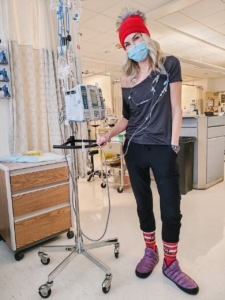 “I had zero risk factors,” Jodie says, explaining how she has no history of cancer in her family and her overall healthy lifestyle.

After her surgery, Jodie spent 9 days in the hospital recovering. Unfortunately, the tumor had already metastasized, so she would undergo very aggressive chemotherapy treatments. She would have 12 rounds, which is the maximum amount. Her surgery and treatment spanned over 8 months.

Jodie explains that the side effects of her chemo treatments were cumulative; the more rounds she did, the more severe the side effects became. A few of her cycles of chemo even had to be postponed due to the severity of her symptoms. 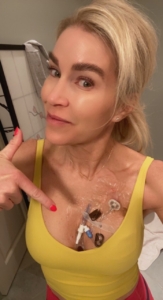 Fortunately, Jodie completed her treatment in May of this year. Since then, she has been cancer-free and has been on her cancer survivorship journey.

Since then, Jodie has been trying to focus on restoring not only her physical health but also her mental health. Although she is cancer-free, she, like many cancer survivors, lives with fear of recurrence.

“You can’t control that,” she says. “It’s terrifying… It changes your perspective on life because you don’t know if you’ll be here this time next year or in two years, so you make the most of your time now and control what you can,” Jodie resolves.

Jodie wants to be an advocate for colon cancer and educate the younger population, who like her, are too young for screening. The screening age for a colonoscopy in Canada is 50, and being 47 at time of diagnosis, Jodie was not recommended for it. She speculates that if the screening age were lower, her cancer likely would have been detected earlier – she may not have had to endure advanced colon cancer and therefore had a less aggressive treatment plan and better outcomes.

Her goal is to help others who are going through a similar experience. “If I can help prevent other people from getting a colon cancer diagnosis then that’s owning cancer.”

Jodie also recalls the support of the nurses and staff that she received during her time at the Tom Baker Cancer Centre. “The nurses in the chemo ward are so fantastic,” she enthuses. “You never really felt alone. They were always there to listen and to support.”

One missing aspect for Jodie were integrative oncology resources at the Tom Baker Cancer Centre. Jodie sought it out on her own, which she found to be a valuable experience. Fortunately, these resources will be available at the new Calgary Cancer Centre, and Jodie is excited about it.

“Make sure that you are using those integrative resources,” Jodie says. “[And] do your own research on nutrition,” she adds, explaining about the importance of eating well during chemotherapy treatments, as certain foods – especially meats – may contain hormones and cause inflammation. 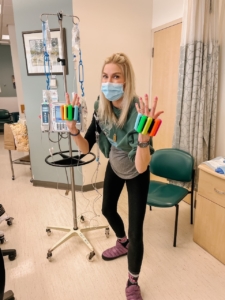 During her treatments, Jodie always brought a unique and fun perspective to the cancer ward. For starters, she would bring a chemo buddy each session – such as her husband, her best friend, and friends who flew in from Halifax, Toronto and LA.

She also wore socks with humorous sayings relating to her cancer, and brought weights to lift, and did lunges and squats around the ward. One day, she even wore a Superwoman outfit. “I [would] always try to bring humour and cheers to the chemo ward.” Jodie did this in the hopes of not only lifting her own spirits but to also inspire other cancer patients.

“It is doom and gloom, so what can you do to cheer yourself up, cheer up other people in the chemo ward?” 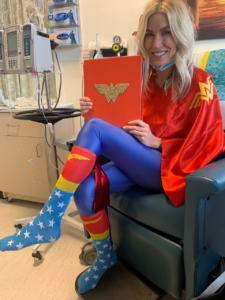 Jodie also found a supportive community online. She openly shared her cancer journey on social media and was met with an overwhelming amount of encouragement from existing friends and made many new friends. Some of which were going through a similar journey.

Jodie has some poignant words for owning cancer: “[I’m] owning cancer by kicking it in the butt so much harder than it’s kicked mine,” she declares, “and by becoming an advocate for bowel cancer, I own it because I can educate and prevent others from getting the butt cancer diagnosis. Colon cancer is preventable, so let’s own it by preventing it.”

Originally posted on the OWN.CANCER blog.

Learn more about colon cancer and how you can help us make life better for Albertans facing it.