Cam Lane knows first-hand the importance of clinical trials. One of them saved his life. 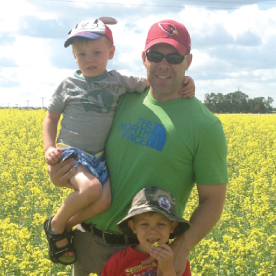 In 2007, the young dad of three was diagnosed with Melanoma on his right leg. Melanoma is a serious form of skin cancer that begins in cells known as melanocytes. It is considered to be dangerous because of its ability to spread to other organs more rapidly if it not treated at an early stage.

“I remember being absolutely shocked when I heard the word cancer. What do you mean cancer, I’m just 35! Will I need chemo? What will happen to me?” says Cam.

Cam underwent two surgeries. A lymph node biopsy in his right groin and a skin graft on the back of his right leg. Despite undergoing successful surgery and learning that cancer had not spread to his lymph nodes, Cam was advised that the chance of reoccurrence for melanoma was high.

“So for four and a half years, I had regular check-in appointments with my dermatologist. It was pretty brutal to hear about the chance of reoccurrence and that there wasn’t much long term survival for anyone with melanoma. I tried to block it out because it scared the daylights out of me and I was absolutely convinced that I was done with this melanoma thing — after all, I was still a young and healthy man.” 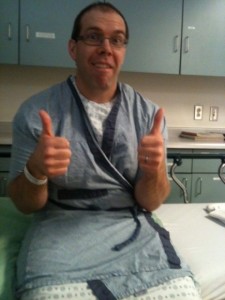 But several years later, his cancer had reoccurred.

“In April 2012 I had one of my regular appointments with my dermatologist, however this time I was concerned about a small pea-sized lump that had formed under my skin at the margin of the skin graft on the back of my leg.  I remember as the dermatologist and his resident excised the small lump, the dermatologist remarked to his resident, ‘See that?  That is cancer.’ My heart instantly sank. I was devastated.

Instantly Cam reached out to Dr. Dave Olson, a melanoma surgeon in Edmonton who performed his lymph node biopsy back in 2007. Cam underwent surgery to remove the affected lymph nodes in his right groin. But the reoccurrences continued and for the next year and a half, and Cam underwent multiple surgeries to have them removed.

In November 2013, cancer had spread to his lungs.

“I remember getting the call from my surgeon when I was at work. He said ‘ Cam it’s gone to your lungs’. I had four tumours in my lungs, and I felt like a ticking time bomb.” says Cam.

“A week later I had quite a reaction, my right leg swelled up and I had these blisters all through my right leg especially where I got my reoccurrences. At the time I was very concerned and asked what the heck is going on there and my oncologist, Dr. John Walker said this is a strong and powerful sign that the therapy is working. It was actually my immune therapy treatment and my immune system attacking those cancer cells. In six months, I had a complete response and no tumours in my lungs.”

By July 2014, Cam had a complete and full response to the treatment and all the cancerous lumps in his lungs had disappeared.

“This summer I celebrated my five year anniversary of a complete response to immunotherapy,”

Today, the dad of three is cancer-free and is grateful for the moments he can spend with his kids and family. From driving his kids to gymnastics and dancing lessons to spending summers at their family cottage in British Columbia. Cam appreciates every moment, the good and bad, that comes with being a parent to a teenage daughter and two younger boys.

“Five years ago if it wasn’t for this trial I would not be here. I have had five-plus years of great memories and moments with my kids and my family. I feel so blessed to do this it could have all been taken away from me before. I never want to forget the anxiety that goes with the diagnosis, it makes you appreciate everything you have because it could all be for naught.”

Thank you, Cam, for sharing your story with the Alberta Cancer Foundation.

We are the official fundraising partner for all 17 Cancer Control Alberta cancer centres in Alberta, and support every cancer clinical trial in Alberta. You can help create more moments for Albertans and their families facing cancer.  Donate Today.