Dave Anderson attempts to live his day-to-day by the old cowboy saying, “never say woe in a bad spot, just keep on going.” It wasn’t until 2018, when Dave was diagnosed with cancer that this proverb weighed an even greater significance on his perspective. 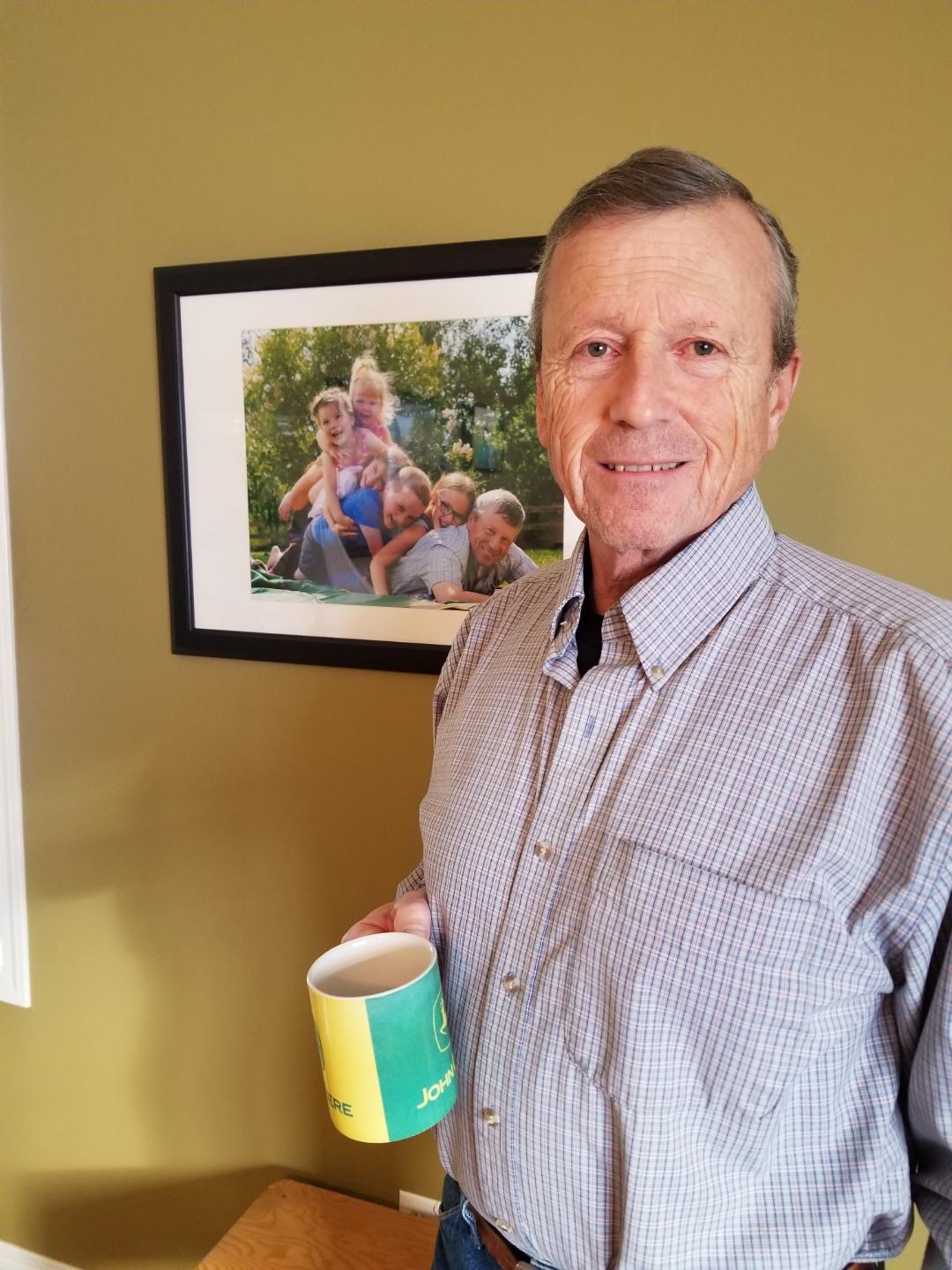 A self-proclaimed cowboy, Dave Anderson has spent the majority of his life as a tractor salesman while living on a farm just outside of Grande Prairie. Farm life for Dave and his wife, Joanne, is both gratifying and demanding. Early morning chores are the ritual and numerous recreation opportunities are just one of the reaped rewards. With three grandchildren just across the hayfield, there is always an adventure to be had. It is a place of serenity away from the urban hustle and bustle, a place seemingly far removed from the personal devastation of cancer.

In autumn of 2018, after finding a small lump in his throat that wouldn’t go away, Dave decided to investigate further with his GP. The lump turned out to be caused by cancer. Oral squamous cell carcinoma was spreading from his tongue.

“When I received my diagnosis here in Grande Prairie my first thought was pretty negative, I thought that my time was up. After speaking to my oncologist I was reassured because there was an 85% survival rate of my particular cancer and my outcome depended on my general health going into my treatment. I also have a daughter-in-law who is a cancer survivor. She became my inspiration throughout my cancer experience. These reinforcements helped me begin treatment with a pretty positive frame of mind”

The Grande Prairie Cancer Centre did not have the capacity to treat head and neck cancer, and so Dave made the four-and-a-half hour drive to Edmonton. There, he would undergo his biopsy surgery at the University of Alberta and chemotherapy and radiation therapy at The Cross Cancer Institute.

“My first day through the door at the Cross Cancer Institute, to say that it was intimidating or terrifying would be an understatement. It was for me anyhow. The staff did a lot to alleviate those fears because everyone truly cared. Over and above how professional everybody was what struck me the most was that it was their calling. They make a tough experience much more bearable with their attitudes.”

Dave’s first contact at the Cross Cancer Institute was with his oncologist, Dr. Williams. From the first meeting, Dave was reassured by Dr. Williams’s confidence, compassionate attitude, and thoroughness. He also spent many consultations with Dr. Scrimger who was both a wonderful doctor and human being. When he first underwent surgery, there were seven separate surgical teams made up of anesthesiologists, surgeons, oncologists and nurses performing surgery on seven other patients! Any apprehension quickly dissipated once Dave observed the orderly and meticulous nature of the healthcare staff. Everything was double, triple checked and nothing was taken for granted.

“The staff were overwhelmingly kind and caring. Everyone I ran into from the parking lot, the receptionist, the volunteers, the radiologist, the radiation techs, and the nurses that administer the chemotherapy were some of the most caring people I’d ever met in my life.”

Having friends and family at his side helped to steady Dave’s fears as he embarked on a grueling six-weeks of chemotherapy and radiation treatment. His wife, Joanne was especially great support. He felt fortunate to have his oldest-son, his daughter-in-law and two grandchildren nearby in Beaumont, Alberta. Even his daughter and son-in-law visited from Nashville. He made friends with other patients. They grieved together, laughed when they could, and encouraged each other through their shared experiences.

Between weekly oncologist and radiologist visits, he had a support group. There was a nutritionist who worked with him daily because the radiation in his throat had hindered his ability to eat and drink, and a speech pathologist to ease the side effects of treatment. His recovery was truly a team effort. Finally, on January 8th, 2019,  Dave rang the Bell of Hope at the Cross Cancer Institute, signaling the end of his cancer journey. An emotional finale.

Today, the new Grande Prairie Regional Hospital, will further expand to include a full range of radiation oncology services. While head and neck patients will still be treated in Edmonton, this will save hours on the roads for patients with other types of cancers.

When asked what the new Grande Prairie Cancer Centre will mean for his community, Dave was impassioned.

“Getting this brand new modern facility is exciting for the community. When you have to travel to Edmonton for treatments it separates you from your loved ones and it adds apprehension during treatments because you aren’t surrounded by the same support as you would at home. Additionally, having to travel for winter time treatments is very stressful when the roads are dangerous, especially when cancer treatment leaves you feeling unwell. That is excellent for Grande Prairie and the community is sure excited.”

Cancer doesn’t discriminate by geography, and we know that every story, every cancer journey and every community is important on its own. At the Alberta Cancer Foundation we are proud to support Albertans throughout their cancer journeys close to home.

Thanks to the commitment of our donors, we are able to help provide world-class cancer care for Albertans living in Grande Prairie with the development of the new Grande Prairie Cancer Centre. By investing locally, we can power progress and accelerate discovery right here at home.