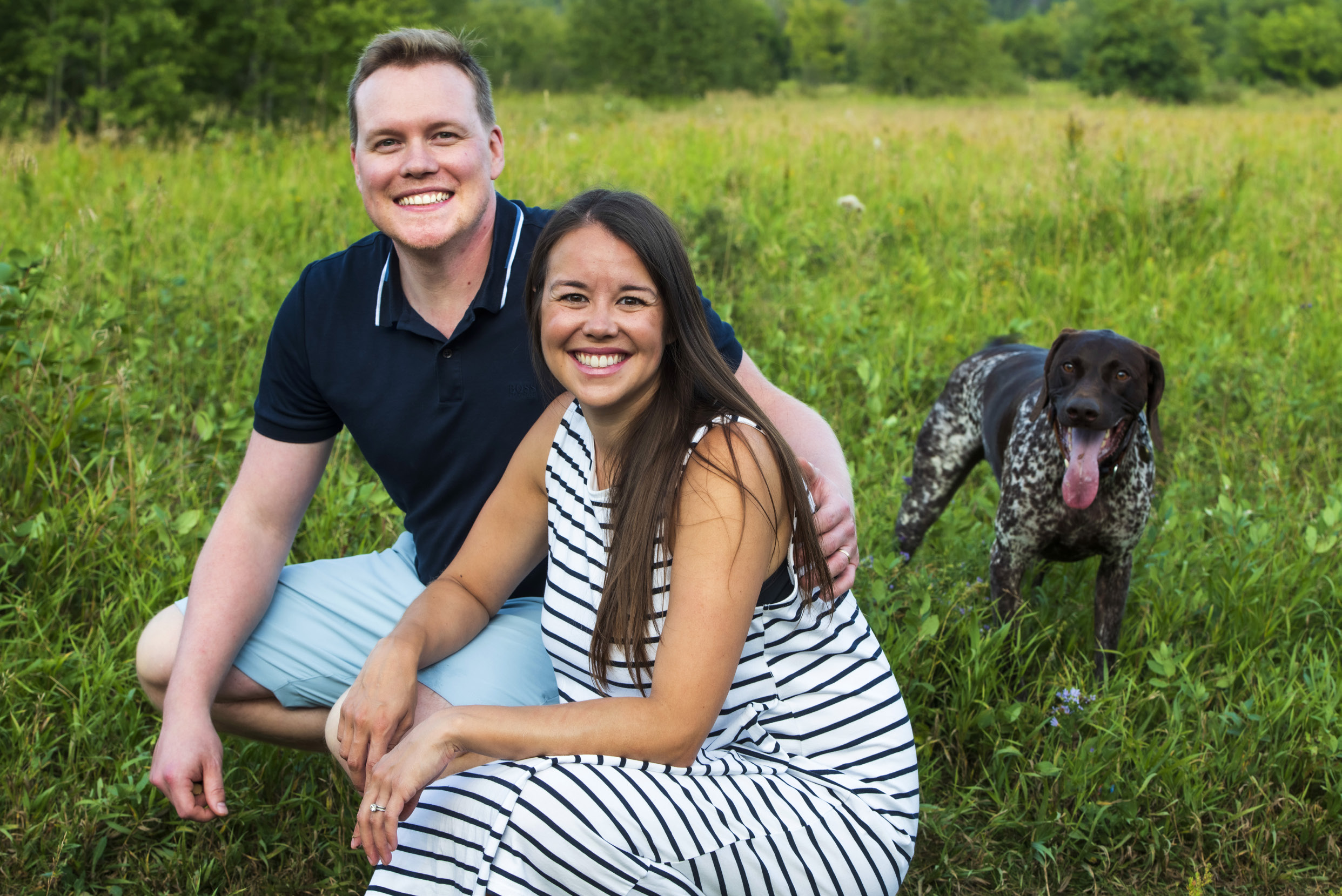 Surgeon scientist Dr. Adam Kinnaird splits his time between treating prostate cancer patients and researching the disease, which about one in seven Canadian men will be diagnosed within their lifetime. The Edmonton-based urologist might do prostate biopsies one day and work in the operating room another, then spend the next day in his lab conducting research in prostate cancer, diagnostics and therapeutics. For Kinnaird, regardless of the environment he’s working in, science and seeing patients are inextricably linked. “It’s absolutely key to try to align the two together,” he says. “Every day, whether you’re in a lab or in a clinic, you are doing research and you are providing patient care.”

Kinnaird, 37, brings that dual focus to his new role, the Frank and Carla Sojonky chair in prostate cancer research. The position supports research that helps better understand, diagnose and treat prostate cancer — the most commonly diagnosed cancer in men. Kinnaird takes the reins from Dr. John Lewis, who held the Sojonky chair for 10 years. The two researchers will collaborate together to drive world-class prostate cancer research in Alberta. Lewis describes Kinnaird as a sharp, intelligent guy who has a keen understanding of science. “He’s also an amazing clinician, and so he really cares about his patients,” says Lewis. Kinnaird views the Frank and Carla Sojonky chair as an opportunity to spend time on both science and high-quality care, the “perfect combination,” he says. Each side informs the other; the patients Kinnaird sees are enrolled in clinical trials he runs. Those trials seek to answer important questions that advance prostate cancer care for current and future patients.

The Frank and Carla Sojonky chair in prostate cancer research is funded through a $5 million endowment held by the Alberta Cancer Foundation. The chair was created by the late Frank Sojonky, a businessman and philanthropist who faced prostate cancer for over two decades, a team of volunteers and a group that came to be known as the Bird Dogs. That’s because Sojonky rescued German shorthaired pointers, bird dogs known for their hunting, pointing and retrieving skills. The team of volunteers adopted a similar approach: finding prospective donors, making the pitch for prostate cancer research, then closing the deal. Through the fundraising efforts of the Bird Dogs, over 250 individual donors contributed to the endowment.

Kinnaird is the owner of a beloved bird dog, a five-year-old German shorthaired pointer named Fritz. “There just seems like there’s something right with the universe with that,” he says, of the Bird Dogs’ significance to his new position. The role allows Kinnaird to explore new projects he describes as high-risk, for the chance they don’t turn out, but with potentially high reward. Such cutting-edge research is not possible without philanthropy, he says. “I’m very grateful to the Bird Dogs and the Alberta Cancer Foundation for this opportunity,” he says. “To be successful, 18 months into my career, I have had a lot of help from philanthropy.”

The Bird Dogs are also back at it again, working with the Alberta Cancer Foundation and the faculty of medicine and dentistry at the University of Alberta to create a one-term, five-year, non-endowed chair. This new position will be called the Bird Dogs chair in translational oncology and will be held by Lewis, the former Frank and Carla Sojonky chair. Lewis will focus on driving the clinical translation and commercialization of novel technologies arising from cancer research in Alberta. That’s a process he knows well; Lewis is already the founder, CEO or chief scientific officer of six spin-off companies, each stemming from the Bird Dogs. One spin-off, Nanostics, is validating a new diagnostic test for prostate cancer. Another, Entos Pharmaceuticals, aims to start the first human clinical trials of a prostate cancer vaccine in the next five years. Lewis met Sojonky before he died in 2012, and Lewis has come to know some of the Bird Dogs’ volunteers. Connecting with people with direct experience with cancer — the same people his research will ultimately help — has been impactful. “That’s what’s really driven me through the last 10 years and will continue to for the next five,” Lewis says.

AN INTRODUCTION TO UROLOGY

Kinnaird’s path to his current position started many years ago. He had long been interested in science, and by high school, Kinnaird was considering a career in either science or medicine. “I’m very happy I’m able to do both,” he says. Born and raised in Edmonton, Kinnaird attended the University of Alberta for his undergraduate degree. He studied physiology and played on the Golden Bears men’s ice hockey team, winning two national championships. Medical school at the U of A came next. Kinnaird initially thought he would go into family medicine, but he reconsidered after a lecture during his second year from urologist Dr. Keith Rourke. “Just the way he described urology, it really struck a chord with me,” Kinnaird recalls. “The thing that’s really cool about urology is you get to use so many different technologies. We operate with robots, we use lasers, we do minimally invasive surgery, and at the same time we also do big open surgeries and remove entire organs.” Kinnaird did a urology residency in Edmonton while also working on a clinician investigator program that combined residency and graduate studies. He completed his Ph.D. as a Vanier Scholar and was awarded the Governor General’s gold medal in research. Next, Kinnaird spent a year at the University of California, Los Angeles, completing a fellowship in imaging, targeted biopsy and focal therapy for prostate cancer. He was excited to be recruited back to the U of A in 2020 as an assistant professor in the division of urology, department of surgery. “The University of Alberta has very good research infrastructure, as well as excellent minds and excellent collaborators,” he explains. Plus, he’s a diehard Oilers fan. These days, the same aspects of science that first drew in Kinnaird continue to excite him. One of his favourite pieces is generating hypotheses and thinking about the ways he can design an experiment to answer a specific question. Then, Kinnaird says the “fun part” is getting to use advanced techniques and state-of-the-art equipment. Throughout that process, he’s thrilled by the potential of discovering something new that could benefit patients. A genuine enjoyment of what he does drives Kinnaird to do more. “I think about research at all times of the day. I think about it when I wake up in the morning and I think about it while I’m laying in bed,” he says. “I really enjoy what I do.