The Power of Gratitude: Ashley Yoisten Shares her Story

In January 2020, Ashley Yoisten, a young mother of two, didn’t expect her life to change forever.

When the now 35-year-old began to notice irritation in her breast, she consulted her family doctor, who suggested she go for a mammogram. Although they were hesitant to do a mammogram given her young age, they decided that it was the best thing to do given her symptoms.

When her mammogram results returned as calcified breast tissue, she was told not to worry. However, this didn’t sit right with her doctor, who referred her to a surgeon.

“I never thought that it would be cancer at any point in time. I truly just felt that it was a cyst or a blockage of some sort,” said Ashley. 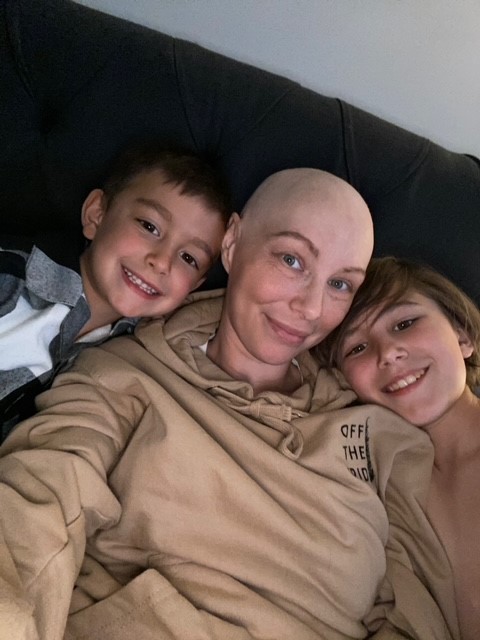 From there, Ashley received an ultrasound as directed by her surgeon, where the worry struck. Immediately after, the doctor and nurse came into the room to perform an urgent biopsy. They later determined that there was, in fact, a bigger problem.

“I remember getting on the table and asking them, “Am I allowed to go back to work after this?” they looked at me like I had five eyes and said, no, you can’t, you need to take some days off,” said Ashley.

Not long after, Ashley went back to the surgeon’s office when she found out that she had a Carcinoma in situ. After a second biopsy, it was determined that Ashley was HER2+, grade 3, stage 3A. While waiting to define the likely next steps, Ashley got even more heartbreaking news – her mom was also diagnosed with cancer.

“It was alarming to realize that it could be genetic and that my sister could be at risk as well or potentially my kids or my nieces and nephews,” said Ashley.

From there, she decided to move forward with a double mastectomy, scheduled for October 28. After receiving the pathology report, she found out that she had four other tumours within her breast wall and Paget’s disease, cancer in the nipple. Her cancer originated from her nipple and spread from there, affecting her lymph nodes.

“I believe very highly in the power of positive thinking, and so when it was all seeming to fall apart, I just tried to keep a positive attitude as much as I could about it.,” said Ashley. If I was having a bad day or having a moment… I did allow myself the space to feel those feelings… but I just tried not to stay within that mindset for very long.”

Throughout her journey, Ashley thought of her late step-father, who also faced cancer. Ashley recalls his positivity and outlook on life, especially when he was undergoing treatment for lung cancer. Unfortunately, her step-father’s cancer was very aggressive and was inoperable. However, she believes that his positive outlook made him outlast his 18-month life expectancy, turning it into four more years of memories.

“I always admired that strength. So when I got my diagnosis, I just remembered that and just wanted to be as positive as I possibly could be no matter how hard it was.”

Along with her step-father’s optimism, Ashley is grateful to her family and friends. To say that going through cancer treatment during a pandemic is easy would be a lie. Ashley was fortunate enough to have a close group of friends and family safely join her cohort, where she could be with them in person.

Ashley, an independent person, who rarely asked for help, leaned on the kindness and support of her family and loved ones who supported her through every step of this journey.

“There was so much love and support for me, my kids and my husband. They were there to catch us and support us for everything we needed,” said Ashley. 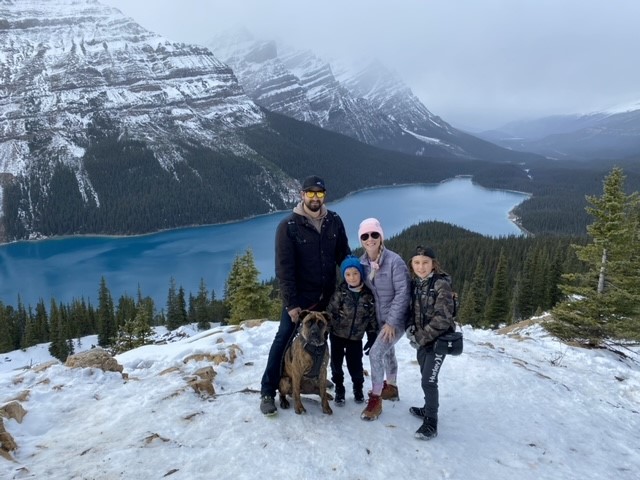 Ashley is also incredibly thankful for her loving husband, Matt and resilient sons, Mason (9) and Nixon (6), who supported her, cared for her and loved her endlessly. With her sons being so young, Ashley still needed to be there for them in any way she could.

“I did my best to be as honest with them as I could about my journey and tried to include them where I could,” said Ashley. “I want them to understand that cancer is a part of life. It happens.”

Ashley completed her treatment in April, doing 25 rounds of radiation and even ending up in the ICU at one point. It was a difficult three months of treatment. Unfortunately, not long after, in May, Ashley and her family got in an accident on their way to a family camping trip, which took a toll on her health. Happily, she is starting to feel like herself again. She allowed herself time to heal and spent lots of time working hard on getting better and back to a place where she felt “normal” again.

“I did all the work; I told my care teams and physios that “I will be your best patient if you just tell me what I have to do, I will do it” because I need to get back to where I was or come back better,” said Ashley.

Recovery was not what Ashely initially expected. She thought she would feel better as soon as her treatment was complete, but she had to learn to be patient and listen to her body. She focused on fueling it with nutrition and respecting it every step of the way, taking the time to focus on not just her body but also her mind.

“Be kind and gentle on yourself and allow yourself that space to heal. This is your journey and no one else,” said Ashley.

Ashley took the time out of her treatments and recovery to share her story on social media. For her, it was an outlet to share with family and friends, but in turn, she found a community going through the same thing. Her journey has and continues to be a massive inspiration to many.

“I found that sharing this helps them know that they can do it too… When they tell me my story brings them comfort – it brings me joy that I can help someone,” said Ashley.