In the heart of Edmonton’s historic Highlands neighbourhood sits the Magrath Mansion. The stunning century-old home was purchased and restored to its original glory in 2000 by Sid and Nellie Braaksma. Sadly in 2019, Sid passed away from cancer, and the family has made the difficult decision to sell the home. ⁠The Braaksma family chose to use this opportunity to fundraise in support of the Cross Cancer Institute in Edmonton. They do this in memory of Sid Braaksma, family patriarch, his granddaughter Korinda Kostiw, and Sid’s brother-in-law Tony Van Orizande, who all received care at the Cross Cancer Institute. Here, Johanna Ryan, recalls the legacy of her late uncle, Tony van Orizande and the exceptional care he received at the Cross Cancer Institute. 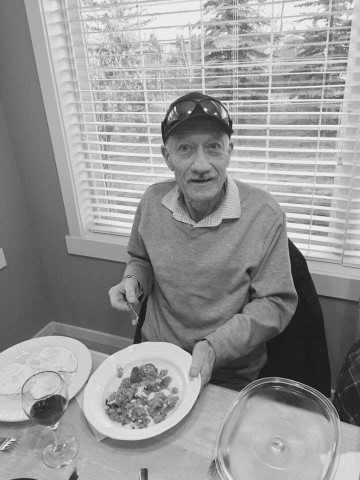 “I will never forget the phone call I received from my parents giving me the news.  I had just poured myself a cup of tea, in my favourite “faith” coffee mug, sinking into our couch after a busy day at work.  As my mom was telling me the results, I stared at the word on the teabag label which said ‘Smile’. Seriously? How was I supposed to smile after hearing my uncle, whom I loved so dearly, had cancer?

“I had prayed that his results would come back with something less serious.  Maybe the doctor would say he just needed a break.  A nice, long vacation somewhere hot, to relax his busy mind and hard-working body.  Uncle Ton very rarely took a day off.  He loved his job, and when he wasn’t busy working, you could find him tinkering around in his home or in his garage.  He would always come up with the most fascinating and unique ideas.  His home was a treasure trove of all his brilliant ideas that he brought to life.

“Life as Ton knew it, would never be the same.  And neither would ours.  He faced his diagnosis and each day thereafter with grace and strength, and never stopped smiling. The Cross Cancer Institute was no stranger to him or our family.  His father, my Opa, was diagnosed with lung cancer when he was 75 years old and passed away on July 22, 1993.

“As a little girl that summer, I remember being in awe of the nurses who took such great care of not only my Opa but my entire family.  They were compassionate, empathetic, highly skilled, and most of all, passionate about what they did, day in and day out.  They took such great care of my Opa, that it brought comfort knowing Uncle Ton would be in their caring and tender hands.”

“While he never had children of his own, he took great pride and joy in sponsoring 2 children through World Vision Canada.  His fridge proudly displayed their pictures and artwork, which would bring a big smile to his face.

“Despite receiving the best care and treatment possible, Uncle Ton sadly passed away in the early morning hours of February 22, 2017.  He always wanted the best for everyone and wanted to make sure everyone was well taken care of.  He was a generous man, quietly donating money to causes that meant something to him.  He never wanted to be in the limelight, or to be acknowledged for his donations, etc.  He believed in a cure for cancer, and while he didn’t live to see that dream reached, one of his last acts of giving was ensuring he left money in his will for the Cross Cancer Institute so that one day, a cure can, and will be found.  And I have faith that one day soon, that will happen, and Uncle Ton will be smiling.”