For more than a decade, Marg Richardson from Red Deer has been a committed donor of the Alberta Cancer Foundation.

In 2008, she decided to make a gift in her will towards the Foundation. Her reason to support Albertans facing cancer is a personal one. Just months after they had gotten married in 1981, Marg’s husband, Doug, was diagnosed with cancer. After nearly two decades of surgeries, treatment and recovery, Doug passed away in December 1999. 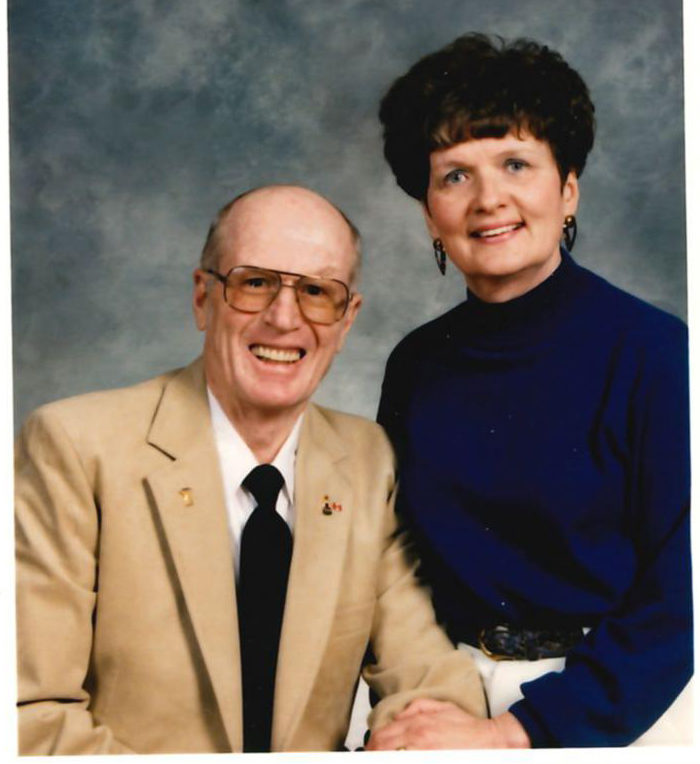 “The way my husband faced all the unknowns and treatments with his cancer journey was inspiring. For nearly two decades he embraced every surgery and every treatment – every opportunity to have more moments. And he never complained or asked ‘why me?’ Instead, he just got on with his life.”

Marg is grateful for the care that her husband received and appreciates every moment of the 18 years she got to spend with him. Today, she shares her husband’s cancer journey and why she chooses to support the Alberta Cancer Foundation.

“Doug’s cancer journey started when he was 51 years old in 1981 and living in Red Deer. Doug was about 6 ft. 2, a big, strong, healthy man who loved the outdoors – hunting, fishing, snowmobiling, etc.

In the fall of 1981, he felt a lump in his abdomen. There were no CAT scans in Red Deer back then but they did many tests and could not find anything. A year later, the pain for Doug got worse and the doctors decided that he had to undergo surgery. But before surgery could be performed, the nurses went on strike, so the doctors decided to send him to Saskatoon. As my mother lived in Ottawa, Doug suggested he be sent there instead so they connected us with Dr. P.J Capello at the Ottawa Civic Hospital and we left immediately.

Dr. Capello looked at the tests they sent with us and he figured it did not appear to be major surgery. Much to everyone’s surprise, this simple surgery turned into a full day in the operating room, resulting in a Whipple’s surgery. He had a 3 1/2 pound tumour which was attached to his stomach, bowels, artery and spleen. Dr. Capello said it was like a box of unopened Kleenex. They removed the tumour from all these organs and put him back together with titanium clips and he ended up in the intensive care. Given the fact that Doug was only 51 and so healthy, they felt he would recover. After a month we returned to Red Deer with Doug being 50 pounds lighter and told he would probably never be able to eat big meals again. Of course, Doug, being who he was, proved them wrong.

Life was good again and continued on until a year or so later when Dough was in the hospital in Red Deer for bloodwork and was told that he could not come home as his white blood cell count was too low. We went to Ottawa again and Dr. Capello removed his spleen, which to Doug, was like having a tooth removed. And we were back to the good life again.

After another year or so, Doug started having high fevers and the doctors in Red Deer could not figure out what was happening so we visited Dr. Capello again and Doug underwent another surgery. Several years later, when Doug got a CAT scan, they found four tumours in the right lobe of his liver. It was quite a surprise to us as he was feeling quite well. At this point, Dr. Capello felt that it would be too risky to operate on Doug, so he suggested three days of chemotherapy instead. I remember how Doug actually walked to my mother’s after chemo, which was four to five blocks from the hospital. That was just the type of man that Doug was.

In 1987, Doug was referred to Dr. Wally Temple at the Tom Baker Cancer Centre in Calgary. Dr. Temple felt that surgery was still an option and so Doug underwent surgery to remove the tumours from his liver. After a month in the hospital and losing another 50 pounds, Doug returned home to Red Deer. Because his gallbladder and bile duct were previously removed, he had tubes for the infection pockets, which we dealt with.

A few years later, the four tumours returned and once again and Dr. Temple and his team removed them. The surgery was very complicated due to his Whipple’s procedure done in Ottawa. After these surgeries and regaining his weight, Doug was in perfect health and enjoyed all his outdoor activities once again as if he had never been sick.

I believe it was in 1993 when the tumours returned again, we were told there was no way they could possibly operate again so we returned home basically with a death sentence hanging over us. It seemed only a month or so later when we got the call that Doug was one of three candidates for a new experimental liver cancer treatment known as cryosurgery.  The miracle is that cryosurgery cures patients whose cancer is too advanced for regular surgery. This surgery had been used in the United States and Dr. Temple and his team went to the U.S. to see if it was appropriate to bring back to Canada, which, fortunately, it was. The surgery was filmed and there was also a write up in the Edmonton Journal and Red Deer Advocate in July 1993 about Doug and the new experimental cryosurgery he had undergone. After surgery and another month in the hospital, losing another 50 pounds and dealing with infections, Doug and I travelled in the motorhome to Alaska much to the surprise of Dr. Temple and his team.

Unfortunately, the tumours continued to return every three years. Dr. Capello told Doug he knew of no-one else who had a total of 16 tumours removed from their liver and had such remarkably good health.

As the tumours advanced, Doug had palliative surgery. He passed away in December of 1999. It was amazing that in October, two months before he died, he tried to go hunting one more time but it was too much and had to return home.

Doug never complained – always said there was someone worse out there. We could never thank Dr. Temple and his team for keeping Doug alive for all those years. We could have lost him in 1982. We had tough times during recovery but we gained 18 years of surviving cancer. To all the health-care people from Ottawa to Calgary, we could never thank them enough.”

Thank you, Marg, for sharing your story with the Alberta Cancer Foundation.